The Heart of Azeroth. Ah, what a weird love-hate relationship I have with this little artifact.

I think we can all agree that the gameplay systems in Battle for Azeroth were not the most enjoyable but, love it or hate it, the Heart of Azeroth has a very unique and alluring appearance. Even if I personally didn’t enjoy Azerite armour, nor the artifact grinding… from the moment I first saw the Heart of Azeroth reveal during Blizzcon 2017, I was rather mesmerized by its design and aesthetics, and I knew I had to attempt to craft my own.

After months asking myself if I would be able to pull it off, I finally decided to take the leap and go forward with the idea, around the time of the expansion’s release. However it wouldn’t be until over a year later that my first batch of replicas would be fully finished. This was due not only to the fact that I had zero knowledge in how to work with the mediums I decided to use in this project, but also because of the mental health issues that made me stop everything I was doing in late 2018, only returning to making art a few months later.

My Heart of Azeroth replicas are mostly made with both polyurethane and epoxy resin. Like I said, I had never attempted these materials before, so I had to learn as I went- and what a process it was.

Looking back, I’m not even exactly sure why I attempted that, but little did I know at the time that these experiments would lead me down one of the biggest self-learning processes I’ve ever experienced.

For my second attempt at Azerite cabochons, I changed to acrylic paints and glitter. While obviously a lot more appropriate and pleasing to the eye than nail polish, I still felt to me that these cabochons were missing something. Even with the magnifying effect of the glass, they lacked some depth… and that was when I decided to dabble in epoxy resin casting for the first time.

Introducing myself to the world of resin casting involved a lot of research and investment. Certainly it was all very exciting as a beginner (so many possibilities!), but also rather overwhelming. The simple step of choosing a resin was confusing enough, let alone what came next! Pigments, dyes, mica powders, silicone molds, safety gear… I spent a lot of time reading about all of these topics before I actually decided to invest a good part of my funds on this venture. But not even diligent preparation could prepare me for the amount of trial and error that followed.

During this preliminary research, I also started working on the prototype for the medallion itself on the side. For this I used polymer clay, a medium I was already used to work with. However, getting the geometry and symmetry right was still a challenge. It took me two scrapped prototypes and almost an entire month, on and off, to finish the original sculpture.

In the meantime, I had decided that if I wanted to make multiples of this piece I would have to delve into mold making as well, as sculpting each medallion from scratch would obviously be pretty much unthinkable. The experience I had with mold making at the time was very scarce and mostly limited to mold putty, such as Amazing Mold Putty. Now, mold putty is practical, quick and easy to use, but it’s not as good at capturing large amounts of detail as other options out there. Indeed, my first mold attempts for the Heart of Azeroth prototype left a lot to be desired. This was when I realized that I would have to learn about silicone mold making, too.

For my first attempt at silicone, I used Alumilite Rubber Strength 3 by Amazing Casting Products. I had heard wonders about Smooth-On at the time (and indeed that’s my go-to option these days), but it’s more expensive and a lot harder to find where I live, so I went for a more affordable option as a precaution.

Alumilite is also a RTV silicone that cures at room temperature in 12-18 hours. The box I bought came with two measuring cups: one for the rubber itself and a smaller, almost spoon-shaped one for the catalyst, so a scale wasn’t even needed. It was a lot easier to use than I thought it’d be and the results on my very first uses were very positive, so I do recommend this brand for those who are just starting out in mold making.

For the mold box, I basically cut and glued scraps of cardboard together with a hot glue gun. I confess that, over a year later, this is still how I make most of my mold boxes because it’s just so cheap and effective. Once the glue is all set I use oil-based clay, such as NSP Plasteline Clay by Chavant, to better seal both the inside and outer edges of the box and help prevent liquid rubber from leaking outside while it cures.

My first silicone mold turned out pretty much perfect except for one thing (for which I was to blame). This was not apparent the first couple of casts, but soon air pockets started to form in the upper ring everytime I made a pendant. Thanks to the wonderful help from fellow artists on twitter, I learned that I needed to place a vent on a strategic spot of the mold and proceeded to make another mold of my prototype. This allowed me to make fully functional casts of the medallion and move on to the next step: painting.

The Azerite gems were really the last thing that I got right. As an absolute beginner it took me several attemps, via trial and error, to get them to look remotely close to the real thing. I also had to learn how to avoid bubbles without a vacuum chamber (there will come a day when I can finally afford one of those). I still couldn’t get the colours entirely right after the first 5 attempts, but this was something I kept working on and improving even after my first set of Heart of Azeroth casts.

Another challenge that I had to face during this step were the size of the gems. I had bought a couple of silicone molds to cast my own Azerite cabochons, but quickly realized that none of these molds were the right size to fit them in the center of my medallion casts. So I had to cast a batch of prototype gemsxz on my pre-made molds at a slighly bigger size, sand them all to the correct size and make a mold out of them. It took me a long while but it certainly saved me a lot of trouble in the long run.

This finally allowed me to finish and assemble my first batch of Heart of Azeroth replicas. I still remember the feeling when I laid down my pliers after tightening the last jump ring. Over a year of research and experimentation, right there in front me, in those first four or five necklaces laying on my desk as I took a deep breath and enjoyed the moment.

With Shadowlands arriving today and our characters shelving the artifact to possibly never touch it again, I’m not sure if this much interest in Heart of Azeroth replicas will remain, but I may still reopen a few slots for these every once in a while in case I’m wrong. In the meanwhile, I’ve also been wanting to start another big new project, although I’m not sure yet of what that will be. Maybe leveling my character in Shadowlands will somehow inspire me with the next crazy idea.

New year, new art! 2020 is now here and gosh, has 2019 flown by. Also, so much for wishing to be more active in this blog in 2019. I know it’s been another long while since I last wrote here, but the past year has indeed been quite weird, if not a wee bit tough, for me. It was mostly a year of healing, of finding myself again… and while I do regret not having been able to make a lot of art in 2019, I recognize that a break and/or a slower rhythm was needed in order for me to achieve other, also very important things in my life.

And even though I didn’t make a lot of art last year, I did pour my whole art into all the projects I worked on. It was also the year I started dabbling with resin, a fun yet entirely new medium. What I know so far, I learned on my own and with the help of fellow artists in the community (I couldn’t be more grateful for all the life-saving advice and tips), but at this point I am still a beginner in resin casting. I feel like 2020 will be filled with learning and growth and I’m thrilled to see where this whole ordeal takes me.

END_OF_DOCUMENT_TOKEN_TO_BE_REPLACED

A dream stays a dream if you are too scared to pursue it.

I’ve just arrived home carrying a bag with written notebooks, a couple of folders and other personal stuff I had back in the office. My work computer is all cleaned up, as is my work email inbox. It is done.

I have officially left my steady full-time job to pursue my dream of becoming an artist. Even though I haven’t completely figured that out yet.

END_OF_DOCUMENT_TOKEN_TO_BE_REPLACED 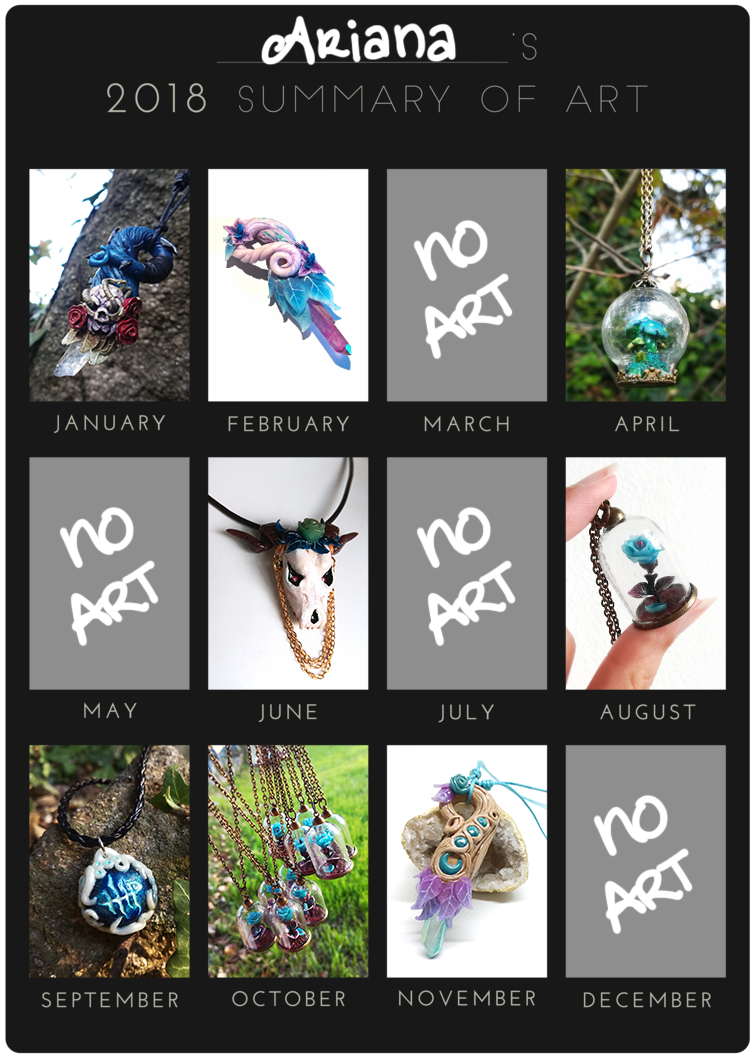 *blows dust off blog* Damn, I really have neglected this space for too long haven’t I.

2019 is just a couple of days away so it’s time to reflect as we look back at we’ve accomplished this year, and forward to what the near future could have in store.

I’m not gonna lie. 2018 was a pretty tough year for me. For the past couple of years, I’ve lived in a very hectic routine as I juggled between my day job, which can get quite emotionally-draining, and freelance work for which I’m very passionate about. Add that to the regular IRL stuff and you barely get any time for yourself. In 2018 I made the mistake of dwelving too deep into the self-sacrifice hole. The result: extreme burnout culminating in a mental breakdown and two months of sick leave (so far).

END_OF_DOCUMENT_TOKEN_TO_BE_REPLACED

For almost a year, me and my boyfriend had been considering adopting a second cat. It was roughly a month ago that we finally decided to take the step, after a coworker showed him pictures of a litter of four kittens that he and his girlfriend had found and brought, together with the mother cat, to his place. We hadn’t actually met our chosen kitty until they brought him to our place a few weeks later. Poor thing wasn’t accustomed to humans yet so he was terrified, and would hiss and hide in every corner he could find. Misha, our 5-year old cat, wasn’t happy at all either, but that was to be expected.